Understanding Who We Are on the Human Journey

Dance of Eternal Rapture is the fourth book in the tetralogy of the author’s dialogue and astral adventures with his spirit guide that began when he was confronted on the street by a homeless man named Albert, who turned out to be a wise spirit in disguise. The author’s first three books, Dancing on a Stamp, Dancing Forever with Spirit, and Dance of Heavenly Bliss, recount his first encounter with Albert and the subsequent astral trips he took with his guide to the Spirit Realm and other places in our galaxy.

In his fourth book, the author describes his most recent astral trips with Albert who introduced him to some wise and famous souls in the Spirit Realm, including Mohammed, Buddha, Mary Magdalene, and Jesus, all of whom revealed startling new truths about their lives on Earth. As well, he was honored to hear words of wisdom from two famous Archangels, Ariel and Michael, and to meet Aphrodite, the goddess of love, who had earned much respect on Earth for her sage advice on love and sex. 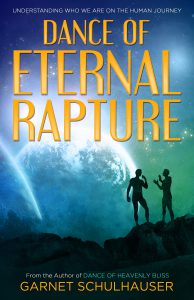 On another excursion to the Spirit Realm, he was thrilled to meet two of his favourite entertainers, Elvis Presley and Robin Williams, who enthralled him with their heartfelt tales of the drug abuse and despondency that led to their tragic deaths, after which Albert introduced him to Leonardo da Vinci who revealed the secrets behind his Mona Lisa and The Last Supper paintings.

On the Earth plane, the author met with Gaia, the consciousness of Mother Earth, who reiterated her warning that humans must stop polluting our planet and abusing her beloved creatures or things would end very badly for our civilization. And he was enchanted by another of Gaia’s mythical creatures—a beautiful mermaid who was sensitive, intelligent, and very adept at avoiding detection by humans.

Elsewhere in the galaxy, he encountered an advanced human civilization that had eradicated all disease and negative emotions through genetic engineering, which allowed its citizens to live in peaceful harmony, free from violence and crime.

And one of his most fascinating adventures involved a journey to Earth in a parallel universe where the American Civil War never happened because Europe had abolished slavery before the colonization of America, and the World Trade Towers in New York were still standing because Islam did not exist as a religion due to the tragic death of Mohammed at an early age.

Praise for Dance of Eternal Rapture

“In his new book, Dance of Eternal Rapture, Garnet Schulhauser intrigues, enchants and imparts great wisdom as he reveals deep spiritual truths. With Albert as his trusted tour guide, Garnet as his student, and the readers as the fortunate tourists, this unlikely duo embarks on journeys to the Spirit Realm. They encounter Mohammad, Buddha, Mary Magdalen, and Jesus, where startling new truths about their human experiences are revealed. They also connect with the consciousness of Mother Earth and, through a wrinkle in time, an alternate universe where prejudice does not exist.  Garnet also enjoys fascinating conversations with Elvis Presley, Robin Williams and many others. Every page brings intrigue, insights and epiphanies. Garnet, in his unique and thought-provoking way, spreads the timeless and vital message of love, compassion, faith and hope.  Garnet’s musings naturally encourage readers to open their hearts, as it thins the veil between heaven and Earth, and brings a sense of joy and peace “home to the soul.” I recommend this book to anyone who wants to be entertained, enlightened, accept love as their truest nature, and gracefully ascend to higher levels of awareness, vibration, and consciousness.”

“Having spent decades studying two hundred years of abundant and consistent communications from those that we used to think were dead, and having used their testimony and insights from quantum physics and consciousness research to construct a detailed picture of our greater reality, I was startled by Garnet Schulhauser’s first book, Dancing on a Stamp. The provenance of his information was a wise street bum named Albert who turned out to be his spirit guide, but the book was so uplifting and so spot-on consistent with everything that all my research had revealed that I interviewed Garnet on my radio program, Seek Reality, and recommended his book as a wonderful read. His second in the series, Dancing Forever with Spirit, was again consistent with what we have learned from the dead but at the same time fanciful and extraordinary. Now Dance of Eternal Rapture is his and Albert’s most adventurous outing yet, transporting us to astral realms to converse with the greatest spiritual figures and to an alternate reality where slavery never existed and a distant planet without violence or crime. Garnet and Albert tell beautiful and captivating stories unlike anything that I ever have read, each with an uplifting message about what still is possible for humankind. For those who prefer their spiritual education wrapped in delightful and soaring tales, Garnet Schulhauser’s books are not to be missed!”

Roberta Grimes, author of five Amazon #1 best-sellers, including The Fun of Dying and host of the weekly radio program Seek Reality

“Garnet’s new book, Dance of Eternal Rapture,  is filled with captivating energy delivered directly from the Spiritual Realm. With love and descriptive detail of the amazing energy that exists all around us, Garnet takes you on a journey to bring you answers that our spirits need to know. The wisdom inside of this text is priceless, filling your soul with comfort and the clear knowing we are never alone.  It is an absolute must read.”

“Garnet Schulhauser’s fourth book, Dance of Eternal Rapture, far surpassed my expectations. I was so excited to read the next chapter in this series of extraordinary spiritual literature Garnet brings to humanity, and I was not disappointed. Garnet’s relay of his travels with his spirit guide and mentor, Albert, is breaking the boundaries of our human minds, expanding our awareness and consciousness.  Within the pages of his fourth book, Garnet and Albert take us on more fascinating journeys within the Spirit Realm and on Mother Earth where we meet and converse with beings who have been held as characters of fiction and myth, revealing the truth behind their existence. Garnet and Albert are reminding us of our multidimensional paths, the nature of reality within different dimensions, and the purpose of our existence.

Garnet relays the most important and pressing message of our time from Mother Earth, spiritual sages, non-physical guides, and many more beings of light, revealing what is possible when we remember who we truly are. As well as exploring more corners of the cosmos and divulging the diversity our souls can experience. I truly believe these books are changing our world and understanding of who we are as human beings with spiritual counterparts, and how we came to be on planet Earth.  The series will go down in history as vehicles of enlightenment, just as the great manuscripts of old have done within religious curriculum. Garnet’s books are a must read for the evolving spiritual conscious explorers and seekers of expanded understanding and knowledge. This is compelling literature for the evolution of humanity.’’

KAren Swain, Spiritual Teacher of Deliberate Creation for The Difference Makers and host of Accentuate the Positive Radio

“Garnet Schulhauser’s fourth book, Dance of Eternal Rapture, is a spiritual tour-de-force that chronicles his most recent astral trips with his spirit guide, Albert, to the Spirit Side to garner words of wisdom from two famous Archangels, Ariel and Michael, from Aphrodite, the goddess of love, as well from Jesus Christ and his bride, Mary Magdalene. On a planet light years from Earth, he encounters an advanced human civilization that enjoys a blissful existence free from violence, crime, and disease through the skillful application of genetic engineering—resulting in a peaceful and harmonious society that those of us on planet Earth should aspire to replicate. All of the author’s astral excursions provide the reader with food for thought to help us understand that love can conquer hatred and violence on Earth, and that each of us must strive to become a beacon of light to pierce the darkness that often engulfs our beautiful planet.”

Dr. Jamie Turndorf, author of the number 1 international bestseller, Love Never Dies: How to Reconnect and Make Peace with the Deceased.