Dance of Heavenly Bliss continues the saga of the author’s spiritual awakening that began when he was confronted on the street by a homeless man named Albert who turned out to be a wise spirit in disguise. The author’s first two books, Dancing on a Stamp and Dancing Forever with Spirit, describe his first encounter with Albert and the provocative dialogue that ensued, as well as a series of astral trips he took with Albert to the Spirit Side and to other parts of our galaxy.

In his third book, the author recounts more astral adventures with Albert who took him to meet a 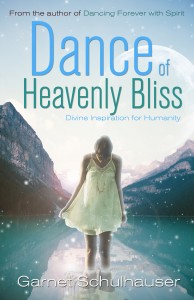 number of distinguished souls on the Spirit Side, including Moses, Jesus and his mother Mary, Lucifer, and the goddess Athena. In the Akashic Records, he got to view an ancient human civilization that lived among the dinosaurs, the building of Stonehenge with the help of visitors from the stars, and the crash of the alien spacecraft near Roswell in 1947.

Back on Earth, the author describes a meeting with Gaia, the consciousness of Mother Earth, who expressed dismay at the abuse humans inflict on her and her beloved critters. And he was delighted to meet two fabled Earth creatures, a Sasquatch and an Irish fairy, both intelligent and peace-loving beings, who lamented that they had to avoid all contact with humans because of our propensity for violence.

These astral trips included visits to other planets with human civilizations that are much different from our own, including one with a matriarchal society ruled by women, as well as a frightening encounter with a Black Hole that opened a doorway for the author to enter a fascinating sub-atomic world.

Dance of Heavenly Bliss was written to instill in humans the urgent need to discard their negative emotions and embrace love and compassion for one another, for Mother Earth, and for all the creatures who share our planet. It reveals that we are all eternal souls traveling on unique journeys on Earth designed to help us grow and evolve as souls, which means that we should never judge other people because we do not know where they have been or where they are going.

Albert inspires humans to pursue spiritual enlightenment by reminding us that we are all part of the Source and intimately connected to each other and to everything else in our vast universe. And when our physical bodies perish we will all return to the Spirit Side where we will be welcomed back with unconditional love, as we eagerly plan the next steps in our evolution.

Praise for Dance of Heavenly Bliss

After reading Garnet Schulhauser’s book Dance of Heavenly Bliss, and I am struck by his desire to improve humanity and his contact with Spirit, something that is obviously important to him. In many ways, with Albert as his guide, he has expressed his love for creatures on our planet, for humanity, and for the universe. Anybody who wishes to have a good read and an interesting journey in spirit should take this book and spend time to peruse the expressions given about the spirit world in order to make up their own minds on many questions that they have asked about the Other Side.
Well done, Garnet, for taking the time to provide humanity with alternative thoughts. Not everybody has the bravery that is required to express the differing opinions on the spirit world to the masses.—Katherine Bright ND, host of News for the Soul Radio (www.katherinebrightaustralia.com)

In Dance of Heavenly Bliss, Albert’s newest revelations are infused with an added sense of urgency. Garnet Schulhauser’s Spirit Guide Albert showcases a sobering outlay of worldly events/higher consciousness prompts, suggesting our lifestyle and sustainability are at odds. It becomes all too clear that Mama Earth and our planetary cohabitants are in desperate need for humans to exit our adolescent phase … and soon. —Wendy Garrett, host of Conscious Living Radio (http://bit.ly/1CO3Go7)

With gentle humor and firm guidance from his spirit companion, Albert, Garnet Schulhauser’s new book takes an unflinching look at the ways in which we live out of alignment with our planet and our soul path. Offering a wake-up call of hope and inspiration, Dance of Heavenly Bliss is an inspiring read for those who seek a deeper connection with Spirit and who want to be part of a positive energetic shift that could transform life as we know it.—Karen Hager, intuitive guide & host of Out of the Fog Radio (http://www.karenhager.com)

Garnet’s new book, Dance of Heavenly Bliss, is one of the most profound and thought-provoking books I have ever read!  The book contains information that is nothing less than a gift to humanity on why we are here, and what is the purpose of life.  With channeled messages from his spirit guide (Albert), the book provides an extremely unique and valuable insight into reincarnation, the purpose of life, the life plan, the life review, and provides, (according to Albert), “… inspiration and comfort to humans searching for meaning in their lives…”

Garnet was guided to write this wonderful book by his spirit guide, Albert, who took him on a series of out-of-body trips to meet several distinguished souls on the Spirit Side, including Moses, Jesus and his mother Mary, Lucifer, and the goddess Athena. In the Akashic Records, he got to view an ancient human civilization that lived among the dinosaurs, the building of Stonehenge with the help of visitors from the stars, and the crash of the alien spacecraft in Roswell in 1947. These astral trips included visits to other planets with human civilizations that are much different from our own, including one with a matriarchal society ruled by women, as well as a frightening encounter with a Black Hole in the center of our galaxy.

I urge everyone to read this book because of its important messages, which could help transform this planet into a beautiful world that is based on love, harmony, and peace – rather than hate, anger, and war…  The white light is always much stronger than the dark.  And I know the forces of light will win out against the forces of darkness, and I believe that there is a very bright and wonderful future for all of us!
—Ted Mahr, psychic and host of Out of this World Radio (www.outofthisworld1150.com) and host of the Galactic Wisdom Conference, bringing the best UFO, psychic, and spiritual healers to the Seattle, USA area annually every spring (www.galacticwisdomconference.com)

In his third book, Dance of Heavenly Bliss, Garnet Schulhauser continues the saga of his spiritual enlightenment with his spirit guide, Albert. During his astral excursions with his guide, the author conversed with Gaia (Mother Earth) and travelled to other planets with human civilizations, including an advanced matriarchal world ruled by women. And on his frequent visits to the Spirit Side, Garnet interviewed many famous and infamous souls, like Moses and Jesus—who regaled him with tales of their lives on Earth. This book is a riveting spiritual exposé designed to encourage humans to embrace love for one another and for Mother Earth and all of her creatures. It is uplifting and a joy to read, and highly recommended for anyone who yearns for more love and peace on our beautiful planet!    –Karen Noé, host of Angel Quest Radio and Hay House author of Your Life After Their Death: A Medium’s Guide to Healing After a Loss (http://www.karennoe.com/)

Dance of Heavenly Bliss is yet another outstanding offering by author, Garnet Schulhauser.  Inspiring and riveting, Garnet, via his spirit guide Albert, allows each of us to vicariously participate on his many excursions that serve to expand our conscious awareness.  No stone is left unturned as he offers fresh perspective on age-old mysteries that currently persist in our time both on and off our magnificent earth.  If one is seeking spiritual expansion; if one is looking for new perspectives on ancient concepts, then this book is definitely a must-read.—Ara Parisien, International Psychic Medium, Spiritual Teacher, and host of Virtual Vision FM (http://virtualvisionfm.com/)

Balance in all things. This new book from Garnet Schulhauser, Dance of Heavenly Bliss, focuses us to a wake-up call of huge proportions. As we travel with Garnet and Albert we begin to see where we have gone off course as a species and how this has adversely affected the place we call home, Gaia, Earth, Our Mother. The story line may not sooth the reader but I do not think it is supposed to. This book is a pointed notification to humanity, a call to action to stop just wringing our hands over the plight of the planet we live on and to do something to help it revert to the sustaining life force that it was originally intended to be.

As you continue to travel with Albert and Garnet, you will meet souls that you would like to talk to and get to eavesdrop on their conversations about why they did some of the things they did and what happened to them because and in spite of those actions. Garnet asks the tough, perplexing questions and some of the answers he gets may surprise you, BUT I guarantee you will also be enlightened. By reliving the experiences of the lives of these souls, the famous, infamous and nondescript, you will be given a new appreciation and tolerant understanding of just what it truly means to be a soul living a human experience both for others and yourself. —Chessie Roberts, host of Get on the Grid Radio and author of Evolving into Self, From the Puppet to the Master: My Evolution from the Cradle to the Grid (www.ChessieRoberts.com)

Back to the Top